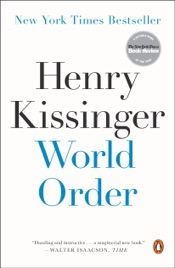 Dazzling and instructive . . . [a] magisterial new book. Walter Isaacson, TimeAn astute analysis that illuminates many of today's critical international issues. Kirkus Reviews Henry Kissinger offers in World Order a deep meditation on the roots of international harmony and global disorder. Drawing on his experience as one of the foremost statesmen of the modern eraadvising presidents, traveling the world, observing and shaping the central foreign policy events of recent decadesKissinger now reveals his analysis of the ultimate challenge for the twenty-first century: how to build a shared international order in a world of divergent historical perspectives, violent conflict, proliferating technology, and ideological extremism.There has never been a true world order, Kissinger observes. For most of history, civilizations defined their own concepts of order. Each considered itself the center of the world and envisioned its distinct principles as universally relevant. China conceived of a global cultural hierarchy with the emperor at its pinnacle. In Europe, Rome imagined itself surrounded by barbarians; when Rome fragmented, European peoples refined a concept of an equilibrium of sovereign states and sought to export it across the world. Islam, in its early centuries, considered itself the worlds sole legitimate political unit, destined to expand indefinitely until the world was brought into harmony by religious principles. The United States was born of a conviction about the universal applicability of democracya conviction that has guided its policies ever since.Now international affairs take place on a global basis, and these historical concepts of world order are meeting. Every region participates in questions of high policy in every other, often instantaneously. Yet there is no consensus among the major actors about the rules and limits guiding this process or its ultimate destination. The result is mounting tension.Grounded in Kissingers deep study of history and his experience as national security advisor and secretary of state, World Order guides readers through crucial episodes in recent world history. Kissinger offers a unique glimpse into the inner deliberations of the Nixon administrations negotiations with Hanoi over the end of the Vietnam War, as well as Ronald Reagans tense debates with Soviet Premier Gorbachev in Reykjavk. He offers compelling insights into the future of U.S.China relations and the evolution of the European Union, and he examines lessons of the conflicts in Iraq and Afghanistan. Taking readers from his analysis of nuclear negotiations with Iran through the Wests response to the Arab Spring and tensions with Russia over Ukraine, World Order anchors Kissingers historical analysis in the decisive events of our time.Provocative and articulate, blending historical insight with geopolitical prognostication, World Order is a unique work that could come only from a lifelong policy maker and diplomat. Kissinger is also the author of On China.

The Lion, the Witch and the Wardrobe is the second book in C. S. Lewis's The Chronicles of Narnia, a series that has become part of the canon of classic literature, drawing readers of all ages into a magical land with unforgettable characters for over fifty years. Four adventurers step through World Order pdf books

#1 New York Times and #1 Wall Street Journal bestselling author Brad Thor brings his darkest and most intriguing thriller yeta terrifying story of espionage and betrayalbrilliantly paced with superb nonstop action. Born in the shadows and kept from heads of state, there are some missions so deadly, World Order epub / PDF Books

LOVE LIKE THIS creates a world of emotions and turmoil, describing superbly the mind of a young lady (Keira) and her struggles to balance her social life and her career. Sophie Love is a natural storyteller. LOVE LIKE THIS is very well written and edited, and I highly recommend it to the permanent l World Order pdf books

The Billionaire's Hired Girlfriend is a new adult contemporary romance with an alpha male hero and a geeky, virgin heroine. They are flawed, funny, passionate, and very relatable for readers who enjoy contemporary romance and womens fiction with strong family value.Alexandra Stewart is dating the ma World Order pdf books

When Phoebe Durbin answers a mail-order bride ad, she doesn't realize the groom-to-be didn't post it. Worse, the day she arrives at her destination, she learns he doesn't even want to get married. Having nowhere else to go, she convinces him to give her a chance to prove having a woman cook and clea World Order epub books

The Runaway New York Times and USA Today Bestseller!Virginity.Bliss Edwards is about to graduate from college and still has hers. Sick of being the only virgin among her friends, she decides the best way to deal with the problem is to lose it as quickly and simply as possiblea one-night stand. But h World Order epub / PDF Books

World Order - A historical western cowboy romance novel about a mail order bride.Tessa OConnor lives in a world of privilege and excess. Her doting parents want her to make a good match with a worthy gentleman and live a respectable life. She is beautiful and intelligent and she comes with a hefty dowry. There is...

A Gentleman in Moscow books by Amor Towles

World Order - From the New York Times bestselling author of Rules of Civility and the forthcoming novel The Lincoln Highway, a story about a man who is ordered to spend the rest of his life inside a luxury hotela beautifully transporting novel. The mega-bestseller with more than 2 million...

The Girl From Paradise Hill books by Susan Lund

World Order - Tess returns home to bury her father but what she finds buried in his attic makes her question everything she thought she knew about the mild-mannered truckerPARADISE HILL, WASHINGTONThe seemingly idyllic mountain town harbors a dark secret: four young girls have disappeared over a forty-year period...

World Order - Jack Reacher hunts the hunter in the third novel in Lee Childs New York Times bestselling series.Ex military policeman Jack Reacher is enjoying the lazy anonymity of Key West when a stranger shows up asking for him. Hes got a lot of questions. Reacher does too, especially after the guy tur...

World Order - On the tail-end of her ex-boyfriend crashing through a restraining order and putting her in the hospital, Krista realizes that the only way to effectively escape her past is to put distance between it. She gets her life back on track in San Francisco with a job that has limitless potential.Unfortuna...

The Opposite of Wild books by Kylie Gilmore

World Order - Steamy small town romance full of heart and humor! USA Today Bestselling Series!Unleash the wild woman?Ex-cop Ryan O'Hare takes one look at buttoned-up control freak Liz Garner and just itches to loosen the woman up. Not that hes into her. Because a woman like that comes with way too many expectatio...

World Order - **Updated to include the short story Emergence.**Everything Emma Thompson owns fits in a suitcase she moves from one roach infested motel to another. She and Jake, her five year old son who can see the future, are running from the men intent on taking him. Emma will do anything to protect him even w...