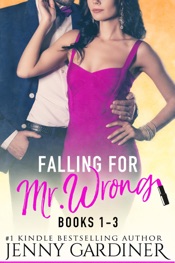 After the palatial elegance of the Royal Romeo series, it's time to relax in the warm, summertime vibes of the North Carolina shores, where sun, fun, and romance take center stage, with the first three books of the series bundled for the first time...Falling for Mr. WrongIf lusting after him is wrong, she doesn't want to be rightHarper Landry sometimes feels like she's turned into a professional dater. Which might not be such a bad job if it didn't involve having to spend so much time with a succession of truly undesirable men who were obviously still single for good reason. So she's elated when she ends up on a blind date with the charming and handsome Danny Greevy, a man who seems too good to be true. But Harper's starting to think that too good to be true might be downright perfect for her. Particularly when the man who launched her man-drought shows up unexpectedly to throw a wrench in her life yet again.Noah Gunderson is back in town after traveling the world for the past several years. Forced to return home after promising his mother on her deathbed to save the beloved inn that she'd nearly run into the ground, he's planning to get far away from Verity Beach just as soon as he's got the inn back in the black. And he's determined not to let the distraction of Harper Landry, the one that got away, keep him here a moment longer.Falling for Mr. MaybeIf it swells, ride itGeorgie Childress moved to Verity Beach to lick her wounds after her controlling fianc pulled a runner mere weeks before the wedding. Jobless and desperate to flee his turf, she sought solace in the quietude of the ocean, happily escaping into her own thoughts while surrounded by diving dolphins and cacophonous seagulls. Only when she accidentally runs over some randomand super sexysurfer dude's surfboard does she start to wonder if she needs to bring her head out of the clouds and start paying attention to life again.Spencer Willoughby long ago fled his rigid upbringing, shunning the familial expectations of an Ivy League education and Wall Street career in favor of the sun, sand and surf along North Carolina's Outer Banks. Give him a surfboard and he's a happy man. That is until some nutty lady with a penchant for fender-benders backs into his beloved hand-crafted wooden surfboard, snapping it in half. It's enough to make a man crazycrazier still because the kooky blond is making his blood run hot.Just when he finally gets the woman out of his head, Spencer is unwittingly paired off with her at a wedding as a favor to a friend, forcing him to make nice with his board-murdering nemesis who he might just want to ride off into the sunset.Falling for Mr. No Way in HellTaking the plungeLacy Caldwell's mermaid gig at a cheesy roadside beach bar provided much-needed income while she pursues her graduate degree. That is until the beloved owner dies and her greedy nephew announces he's cashing out by closing the bar and selling the property to a developer who's going to replace the kitschy charm of the Mermaid's Purse with ocean-view condos.Cameron Sanders can't believe his good luck. Struggling financially, he's thrilled to find out some random, ancient aunt he hardly knew died and left him an inheritance that'll help take the money monkey off his back. He's ready to go to the mat in battle when some annoying mermaid from the bar tries to throw a wrench in his plans. But things get complicated when he realizes that she's a woman he's started to have feelings for.

When you think that life cannot get better, Blake Pierce comes up with another masterpiece of thriller and mystery! This book is full of twists, and the end brings a surprising revelation. Strongly recommended for the permanent library of any reader who enjoys a very well-written thriller.--Books an Falling for Mr. Wrong Series (Books 1 - 3) epub / PDF Books

#1 New York Times BestsellerOver 1 million copies soldIn this generation-defining self-help guide, a superstar blogger cuts through the crap to show us how to stop trying to be positive all the time so that we can truly become better, happier people.For decades, weve been told that positive thinking Falling for Mr. Wrong Series (Books 1 - 3) pdf books

A REESE'S BOOK CLUB PICKTHE NEW YORK TIMES BESTSELLERONE OF THE NEW YORK TIMES BEST THRILLERS OF 2020I loved this book. It gave me the same waves of happiness I get from curling up with a classic Christie Falling for Mr. Wrong Series (Books 1 - 3) epub booksThe alternating points of view keep you guessing, and guessing wrong.  Alex Michael Falling for Mr. Wrong Series (Books 1 - 3) epub books

Take a trip through the defining moments of our global story and see the thinkers, leaders, ideas, and inventions that have shaped the world. Presented in a beautiful slipcase, World History is an essential guide for anyone who loves history or wants to broaden their knowledge. This accessible book Falling for Mr. Wrong Series (Books 1 - 3) epub books

New York Times and USA Today bestselling author Kristen Ashley brings a new story in her Chaos seriesWhen he was sixteen years old, Jagger Black laid eyes on the girl who was his. At a cemetery. During her mothers funeral.For years, their lives cross, they feel the pull of their connection, but then Falling for Mr. Wrong Series (Books 1 - 3) pdf books

Dragon-shifter leader of Clan StoneRiver, David Lee, has vowed to never take a mate. The previous five clan leaders all lost their mates to tragedy, and he is determined to prevent any other female from sharing the same fate. Even when he discovers his true mate is human, David tries his best to kee Falling for Mr. Wrong Series (Books 1 - 3) epub / PDF Books

Theres no denying destiny . . . For too long, Benjamin Reese has masked his deadly skills and temper with loyalty and humor. A vampire-demon hybrid, he fiercely protects his family, guards his brothers, and destroys the enemy without mercy. But when he discovers one fragile, beautiful blondea w Falling for Mr. Wrong Series (Books 1 - 3) epub / PDF Books

British ad exec Dylan Locke isn't looking for love. He isn't looking for fate. He's definitely not looking for Audrey Lind. She's pretty, far too young, and overly romantic--in short, exhausting. But when the girl, young enough to be his daughter, literally lands in his lap and asks for his expertis Falling for Mr. Wrong Series (Books 1 - 3) pdf books

In this satisfying page-turner from the queen of beach reads (New York Magazine), a Nantucket novelist has one final summer to protect her secrets while her loved ones on earth learn to live without their golden girl.On a perfect June day, Vivian Howe, author of thirteen beach novels and mother Falling for Mr. Wrong Series (Books 1 - 3) pdf books

The Way of Kings books by Brandon Sanderson

Falling for Mr. Wrong Series (Books 1 - 3) - From #1 New York Times bestselling author Brandon Sanderson, The Way of Kings, Book One of the Stormlight Archive begins an incredible new saga of epic proportion.Roshar is a world of stone and storms. Uncanny tempests of incredible power sweep across the rocky terrain so frequently that they have s...

Falling for Mr. Wrong Series (Books 1 - 3) - Here's everything you need to know about iPad, in a handy digital format. Get to know iPad and discover all the amazing things it can do, and how to do them. It's the definitive guide for getting the most from your new iPad, straight from Apple. The iPad User Guide is an essential part of an...

Falling for Mr. Wrong Series (Books 1 - 3) - Hug (the Pug) tells the tale of a cute little pug who is on a quest for friendship, however, will his bladder problem prevent him from making friends?...

Falling for Mr. Wrong Series (Books 1 - 3) - The only authorized edition of the twentieth-century classic, featuring F. Scott Fitzgeralds final revisions, a foreword by his granddaughter, and a new introduction by National Book Award winner Jesmyn Ward.The Great Gatsby, F. Scott Fitzgeralds third book, stands as the supreme achievement of his ...

The Mysteries of Free Masonry books by William Morgan

Falling for Mr. Wrong Series (Books 1 - 3) - This book represents a great historical artifact of the anti-masonic movement of the 19th Century. The book also talks about the process of becoming a Mason is a life-long journey of learning and a desire for wisdom....

Falling for Mr. Wrong Series (Books 1 - 3) - THE WICKED AFTERMATH is an emotionally gripping story of love, loss, and hope, with a rich and entrancing happily ever after. All Wicked novels may be enjoyed as stand-alone romances.When the person you blame for your grief is the only one who can save you from the pain...Tank Wicked lost his s...

Falling for Mr. Wrong Series (Books 1 - 3) - One of the beneficial results of the Great War has been the teaching of thrift to the American housewife. For patriotic reasons and for reasons of economy, more attention has been bestowed upon the preparing and cooking of food that is to be at once palatable, nourishing and economical. In the Itali...

Falling for Mr. Wrong Series (Books 1 - 3) - In his first battle with the great white whale, Captain Ahab lost his leg. Living with the constant reminder of his failure, Ahab gathers a second expedition, with the singular purpose of hunting and killing the beast that crippled him. Told from the perspective of crew-member Ishmael, the hunt for ...