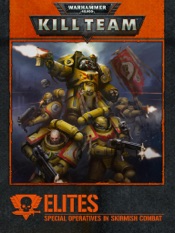 Though kill teams may number only a handful of individuals, they are sent to achieve victory where entire armies cannot. Assassination, sabotage, couriering vital messages through active war zones these and hundreds of similar missions fall to the kill teams. However, when the stakes are highest and the objectives are most crucial, those teams will comprise the most elite specialists that the warlords of the Warhammer 40,000 galaxy can deploy.Highly trained stealth agents drive deep into enemy territory, veiled by technology or sorcery. Massively armoured Terminators or Ork Meganobz blast their way down foe-packed tunnels to tear the heart from the enemys defences. Towering Custodian Guard form a gilded shield before Imperial commanders and allow none to harm their wards. Asuryani Aspect Warriors launch preemptive raids that will save or damn worlds. Kill Team: Elites allows you to include such paragons of war in your games of Kill Team.The Kill Team: Elites expansion includes the following contents:- 67 new datasheet introducing a host of new Commanders and special operatives, ranging from Space Marines clad in Terminator armour to the deadly Aspect Warriors of the Asuryani there are even datasheets for a number of unique Commanders such as Illic Nightspear, Boss Snikrot and the legendary Sly Marbo!- A new faction in the form of the mighty Adeptus Custodes, featuring Custodian Guard, Allarus Custodians and even a Shield-Captain as a Commander- Sub-faction rules such as Legion Traits, Regimental Doctrines and Drukhari Obsessions as well as thematic Tactics immerse your kill teams ever deeper into the narrative- Introduces a new Commander Specialism Legendary Hunter complete with skill tree and Tactics- 11 new missions (3 open play, 4 narrative play and 4 matched play)You will need the Kill Team Core Manual to use this expansion, as well as the Kill Team: Commanders expansion if you wish to use any of the Commanders datasheets.This is an Enhanced Edition featuring the same, complete and unabridged content as the print edition in a handy, space-saving portable format, it also contains the following extra features:- Zoomable, pin-sharp photography, allowing you to appreciate the fine details of Citadel miniatures in a new light- A Glossary tap terms and rules to see their details in an instant- 360-degree miniature photography, rotatable with a swipe of a finger- Scrolling text, designed to optimise the reading experience for your phone or tablet- Pop-up content bring up extra information at a touch- Panoramic art and photography designed to bring out detail in a way that makes the most of your display- Bookmarks got a reference you need to use often? Add a bookmark and jump between your pages with a tap.

Kill Team: Elites (Enhanced Edition) - Enter the world of Homer's ancient Greece with the enhanced e-book edition of The Song of Achilles. This edition lets you further engage with this compelling story through video interviews with Madeline Miller and Gregory Maguire, bestselling author of the Wicked series, clips from the audio book at...

Harry Potter and the Chamber of Secrets (Enhanced Edition) books by J.K. Rowling

Kill Team: Elites (Enhanced Edition) - 'There is a plot, Harry Potter. A plot to make most terrible things happen at Hogwarts School of Witchcraft and Wizardry this year.' Harry Potter's summer has included the worst birthday ever, doomy warnings from a house-elf called Dobby, and rescue from the Dursleys by his friend Ron Weasley in a m...

Kill Team: Elites (Enhanced Edition) - Butterfly Facts For Kids is an engaging butterfly facts book for kids ages 9-12Discover the beauty and grace of these incredible flying insects!Learn all there is to know about butterflies. Explore the fascinating world of these graceful insects!Children's book author and educator, Cindy Bowdoin, pr...

An Easy Guide to Meditation books by Roy Eugene Davis

Kids vs Fire: Where Did Fire Come From? (Enhanced Version) books by Peter Galante & Felipe Kolb

Kill Team: Elites (Enhanced Edition) - Teaching your children phonics has never been more fun, or easier than this!Each chapter is devoted to one sound and is designed to:Give your child a deep understanding of the sound, and when it is used.Keep your kids coming back for more with the funny animation, demonstrating the sound in real lif...