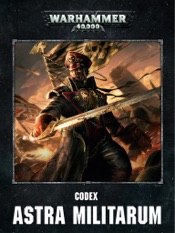 This is an Enhanced edition featuring the same, complete and unabridged content as the print edition in a handy, space-saving portable format, it also contains the following extra features:- Zoomable, pin-sharp photography, allowing you to appreciate the fine details of Citadel miniatures in a new light;- a Glossary tap terms and rules to see their details in an instant;- 360-degree miniature photography, rotatable with a swipe of a finger;- Scrolling text, designed to optimise the reading experience for your phone or tablet;- Pop-up content bring up extra information at a touch;- Panoramic art and photography designed to bring out detail in a way that makes the most of your display;- Direct links to the Games Workshop and/or Forge World web stores see a miniature you like? You can order it straight away.- Bookmarks got a reference you need to use often? Add a bookmark and jump between your pages with a tap.The Astra Militarum is the implacable military arm of the Imperium, and one of the largest forces in the galaxy. On thousands of battlefields scattered throughout the galaxy, the soldiers of the Astra Militarum march to war. They are the Hammer of the Emperor, who with faith, fury and sheer weight of numbers crush heretics and xenos alike beneath their boots. Massed ranks of Guardsmen unleash concentrated salvoes of las-blasts while officers bellow orders over the thunderous roar of tank and artillery fire.Codex: Astra Militarum contains a wealth of background and rules the definitive book for Astra Militarum collectors. Within, youll find:Background- Hammer of the Emperor: the origins of the Astra Militarum dating back to the Great Crusade with details of their structure and organisation, the methods of recruiting (some more humanitarian than others), their training and deployment;- A Galaxy of War: an annotated map of the current state of the galaxy, with key war zones where the Astra Militarum battle;- Detailed background and colour schemes of the Astra Militarum regiments of Cadia, Catachan, Armageddon, Vostroya, Vahalla and Tallarn;- Regiments of Distinction: background on 12 regiments Armageddon Ork Hunters, Athonian Tunnel Rats, Miasman Redcowls, Mordian iron Guard, Tanith First and Only, Savlar Chem-Dogs, Ventrillian Nobles, Indigan Praefects, Mordant Acid-Dogs, Faeburn Vanquishers, Truskan Snowhounds and Vresh Grenadiers;- Heroes Beyond Number: a history of the major battles fought by the Astra Militarum;- Background and details on each character, vehicle and unit available to an Astra Militarum army;- A showcase of beautifully painted Citadel miniatures, depicting the colour schemes of several regiments painted by the renowned Eavy Metal team including expertly-converted models showing you how to represent the more esoteric regiments on the gaming table.RulesEverything you need to get an Astra Militarum army primed for games of Warhammer 40,000 is in here:- 56 datasheets containing rules for every Astra Militarum unit and vehicle;- Army abilities reflecting the Astra Militarums methods of war, including Astra Militarum Orders and Regimental Orders;- Armoury of the Imperium: wargear both ranged and close-combat used by the Astra Militarum;- Points values for all miniatures, weapons and wargear for use in Matched Play games;- Bulwark of Humanity: rules for Battle-forged armies:- Regimental Doctrines for Cadian, Catachan, Valhallan, Vostroyan, Armageddon, Tallarn, Mordian, Militarum Tempestus Regiments;- 6 unique Warlord Traits, - 25 Stratagems, with 8 specific to the Regiments named above;- the Heirlooms of Conquest: a selection of rare wargear; - The Psykana psychic discipline, available to any Astra Militarum model with the Psyker keyword,- 6 Warlord Traits for use by any Warlord, with a further specific to the above-named Regiments;- 6 unique Tactical Objectives.

This Time Next Year books by Sophie Cousens

INSTANT NEW YORK TIMES BESTSELLER A GOOD MORNING AMERICA BOOK CLUB PICKTheir lives began together, but their worlds couldn't be more different. After thirty years of missed connections, they're about to meet again...Minnie Cooper knows two things with certainty: that her New Year's birthday is unluc...

Pike Logan tracks highly-trained Russian assassins to Brazil in this blistering, action-packed thriller from New York Times bestselling author and former Special Forces Officer Brad Taylor.Its an excellent read, and I greatly enjoyed it. Nelson DeMillePike Logan and the Taskforce were once the apex ...

The Vineyard at Painted Moon books by Susan Mallery

In true Susan Mallery fashion, strong female characters, friendship, and family are at the center of THE VINEYARD AT PAINTED MOON. You're sure to laugh and cry along the journey and delight in the happy ending.Robyn Carr, #1 New York Times bestselling author of Virgin RiverThe Vineyard at Painted Mo...

New York Times bestselling author John Grisham takes you to a different kind of court in his first basketball novel. Samuel Sooley Sooleymon is a raw, young talent with big hoop dreams and even bigger challenges off the court.In the summer of his seventeenth year, Samuel Sooleymon gets the chan...

'Perfect if you loved THE THURSDAY MURDER CLUB' - reader review'An entertaining romp and a fascinating insight into the weird and wonderful ways of the British aristocracy' S.J. Bennett, author of The Windsor KnotIt's the 1930s and a mysterious illness is spreading over Scotland. But the noble and a...

I believe we can change the world. But first, weve got to stop living in fear of being judged for who we are.Rachel Hollis has seen it too often: women not living into their full potential. They feel a tugging on their hearts for something more, but theyre afraid of embarrassment, of falling short o...